Download PDF Cloning and the Future of Human Embryo Research 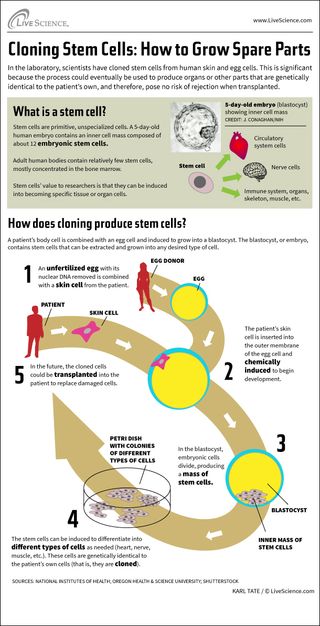 Which raises the question: Can real lines be drawn? Can limits be set and coherent and lasting distinctions made? For example, Republican senator Bill Frist of Tennessee has proposed that all human cloning and the creation of embryos solely for research and destruction be banned; that the total number of embryos used for research be limited, but that embryonic stem cell research from spare embryos be approved and federally funded; and that there be increased funding for adult stem cell research. This is the sort of compromise—one that claims to be intellectually coherent, morally grounded, and practically achievable—that the anguished moderates seek.

There are many types of anguished moderates. There are morally serious pro-choicers, like representative David Wu of Oregon, who defend abortion but take concerns about the use of embryos seriously, and who realize that even the benefits of research do not justify risking a leap into a Brave New World of human cloning. This group is willing, if necessary, to concede some forms of embryonic stem cell research if it can draw a bright line against human cloning.

It adopts, in other words, a strategy of containment, a melancholy realism about where we are and what is possible.


There will be strong pressure on both the Democratic Senate, which must decide what to do about human cloning, and President Bush, who must decide whether or not to authorize public funding for embryonic stem cell research, to come down somewhere in this anguished center. President Bush, if one takes his earliest statements seriously, believes that research on human embryos is wrong. And he must also decide how strongly to push for a ban on create-and-kill embryonic research in the private sector.

Senate majority leader Tom Daschle has a different dilemma: The Democrats risk becoming the party of human cloning. After all, Democrats in the House voted to 53 in favor of embryonic cloning; Republicans voted to 25 against it. In his statements, he went out of his way to separate the cloning debate from the stem cell debate—decrying cloning and endorsing stem cells.

But what he and his party will do in the Senate is uncertain. Will he challenge the research establishment and the plurality perhaps even the majority within his own party that approves of embryonic cloning? Or is health-at-any-cost the new defining principle of liberalism?

Those in the last group, which includes the authors, share a foreboding about where the new science is taking us. Its members made up the core of support for the Weldon ban on human cloning, and comprise moral conservatives mostly religious and some on the morally serious environmental and anti-corporate left.

And they want to stop it.

Part Three: The Case Against Cloning-for-Biomedical-Research - The New Atlantis

In his brilliant critique of human cloning in the New Republic in May , Leon Kass began with the following admonition:. The urgency of the great political struggles of the twentieth century, successfully waged against totalitarianisms first right and then left, seems to have blinded many people to a deeper and ultimately darker truth about the present age: all contemporary societies are traveling briskly in the same utopian direction. What we are debating now is whether we have any choice in how this march turns out, whether we can stop or turn back, and whether we even want to.

It is in the nature of modern democracies, certainly American democracy, that issues move in and out of sight. At present, we are in the midst of a debate on embryonic research, human cloning, and stem cells. But the choices and advances that have placed these dilemmas before us did not happen overnight. They happened step by step, one innovation after the next. The dilemmas themselves were always there, if perhaps not always quite as pressing as they now seem. But since then, after the initial shock and horror of each new technological development, there came a period of quiet momentum in its favor, then tacit acceptance, then normalcy.

Now, the issue is publicly joined. Are there moral markers that can hold? Can we preserve the benefits of medical progress without succumbing to a post-human future? Which of our past decisions—or non-decisions—must we revisit? And how solid are the compromises of the anguished moderates? There is, in the best of these compromises, perhaps some of the prudence of those, in the s, who thought it was enough simply to halt the spread of slavery. But as with slavery, there are inconsistencies and temptations that make the anguished moderate position unsustainable.

Science fiction has used cloning, most commonly and specifically human cloning, due to the fact that it brings up controversial questions of identity. Robin Cook's novel Chromosome 6 and Michael Bay's The Island are examples of this; Chromosome 6 also features genetic manipulation and xenotransplantation. Years later, these clones reveal themselves to the world by successfully pulling off a mass genocide of their counterparts. From Wikipedia, the free encyclopedia.

Linked bibliography for the SEP article "Cloning" by Katrien Devolder

That Doesn't Mean You're Next".

Are Embryonic Stem Cells Research and Human Cloning by our Future?

The Clinton administration's argument that such destruction and the use of the resulting cells were completely separate activities was criticized as hypocritical and evasive even by supporters of federal funding. The policy articulated by President Bush on August 9, is a more subtle and complex matter.

Trump Is Not Well

The President's stated goal was to promote the possible benefits of embryonic stem cell research without encouraging future destruction of human embryos. Therefore, he said, federal funds would only support research using cell lines already created by destroying embryos in the past.


The limited number of cell lines that the Bush Administration approved for federally funded research is meant to be adequate only for basic research, designed to determine the most promising avenues for further exploration. Some researchers have complained that the currently eligible cell lines are of insufficient volume for treatments on the assumption that treatments will ever emerge , have inadequate genetic diversity to treat most of the patients who may want cell implants, and might be inappropriate for human transplantation because they are grown in cultures of mouse feeder cells.

Recently a campaign was launched to reverse the current policy and authorize funding for research on new embryonic stem cell lines, cultured without the use of mouse feeder cells. Proponents have said that this expansion is necessary to take advantage of new advances in the use of embryonic stem cells. On closer examination, however, it turns out that the only advances cited are simply advances in growing the stem cells without mouse feeder cells.

The truth about stem cell science

Use of new cell lines from frozen embryos has not been shown to be necessary for current basic research, and would still be completely inadequate for any large-scale clinical research — suggesting that the proposed policy expansion is itself a transitional step toward mass-producing embryos by cloning or other means solely for harmful experimentation. Thus when the new mixture of adult and embryonic cells is transplanted into a patient, any clinical benefits may well arise from the adult cells -- but would be attributed by embryo researchers to the embryonic stem cells, and used to argue in favor of funding even more embryo destruction.

This campaign illustrates that to some proponents, preferentially advancing research that relies on the destruction of embryonic human life has become virtually an end in itself. Some view the Bush administration policy itself as a transitional policy.

If new advances arise using existing embryonic stem cell lines or from research in the private sector using new cell lines , political pressure will likely increase for expanding the policy and involving the government in active and direct support for the destruction of developing human life. If those advances do not come forward, or are rendered less relevant by more rapid advances using non-embryonic cells, interest in funding research on embryonic stem cell lines will likely fade, as occurred in the case of research using fetal tissue from abortions some years ago.